The charter school movement has roots in a number of other education reform ideas, from alternative schools to site-based management, magnet schools, public school choice, privatization, and community-parental empowerment. The term “charter” may have originated in the 1970s when New England educator Ray Budde suggested that small groups of teachers be given contracts or “charters” by their local school boards to explore new approaches. Albert Shanker, former president of the American Federation of Teachers, then publicized the idea, suggesting that local boards could charter an entire school with union and teacher approval to serve as labs for ideas that could then expand. 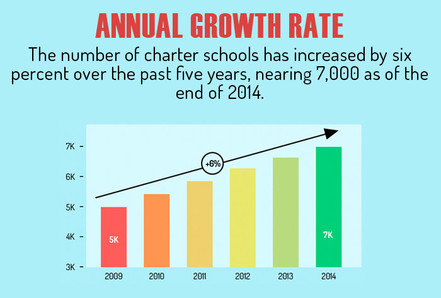 In the late 1980s, Philadelphia started some schools-within-schools and called them “charters.” Some of them were schools of choice. The idea was further refined in Minnesota where charter schools were developed according to three basic values: opportunity, choice, and responsibility for results. This was occurring at a time when greater accountability in education, oversite of public funds, and high quality training for educators were priorities. Charter schools were seen as a way to meet these many goals.

In 1991, Minnesota passed the first charter school law, with California following suit in 1992. By 1995, 19 states had signed laws allowing for the creation of charter schools, and by 2015 that number increased to 42 states, Puerto Rico, and the District of Columbia. Charter schools have steadily grown every year for over a decade, enjoying broad support from governors, state legislators, and past and present secretaries of education. In his 1997 State of the Union Address, President Clinton called for the creation of 3,000 charter schools by the year 2002. In 2002, President Bush called for $200 million to support charter schools. Since 1994, the U.S. Department of Education has provided grants to support states’ charter school efforts.
​
Since the first Charter School Program grants in 1994, the federal government via the U.S. Department of Education has spent nearly $4 billion in support of charter schools. These funds have mostly been dispersed to state education agencies who then pass along the funds to charter schools to various expenses. Startup expenses in particular are offset by these funds. President Obama proposed budget for fiscal year 2016 includes $375 million earmarked for charter schools. This was nearly a 50% increase on typical funding to charter schools during his administration. Additionally, congressional attempts to rewrite No Child Left behind have also increased the amount of funding to charter schools. Having had consistent presidential backing since the Clinton administration to the present day, charter schools seem likely to continue their rapid expansion.

All information on this page is from the National Charter School Resource Center.
Please visit their website for more detailed information about charter schools.
Powered by